This Elderberry Juice Recipe - sometimes known as Elderberry Syrup - has strong anti-viral properties.
It is a great immune boosting remedy and will be very useful for you as the cold and flu season approaches.

There are two ways of using Elderberry Juice (syrup):

Children: start with half a teaspoon for babies, increasing to the adult dose by around 12 to 14 years old.

I like to add it to a small glass of hot water - I find it soothing.  Elderberry has been shown to reduce the duration of flu/cold symptoms. There have been many studies indicating this and Elderberry Syrup is an ancient remedy passed down through generations. Science is only just catching up with explaining 'why' these things work.

It is safe for small children (don't use honey to sweeten it if you are giving it to children under one year old).

Elderberry is considered 'hot and dry' in plant energetics. It strengthens the cell membranes and makes them less penetrable to attack from viruses.

The seeds contain glycosides which the human body can convert to cyanide... you don't want that. Cooking destroys the glycosides, making them safe to eat.

It is the Black Elder Sambucus nigra that is the medicinal variety of the elderberry tree - there are others, but they are ornamental and are inedible.

Only eat the berries or flowers of the Elder - all other parts can be toxic.

Be cautious about how much elderberry you consume if you are on diuretics or laxatives - they can enhance the effects and could lead to dehydration.

It's perfectly possible to make this elderberry juice recipe with frozen elderberries if you like.

In the fall, when you find a good source, simply pick extra berries and prepare them to just before the cooking stage. Then freeze them in bags in amounts you think you'll use - I would estimate around 14 ounces will make three quarters of a pint of juice. 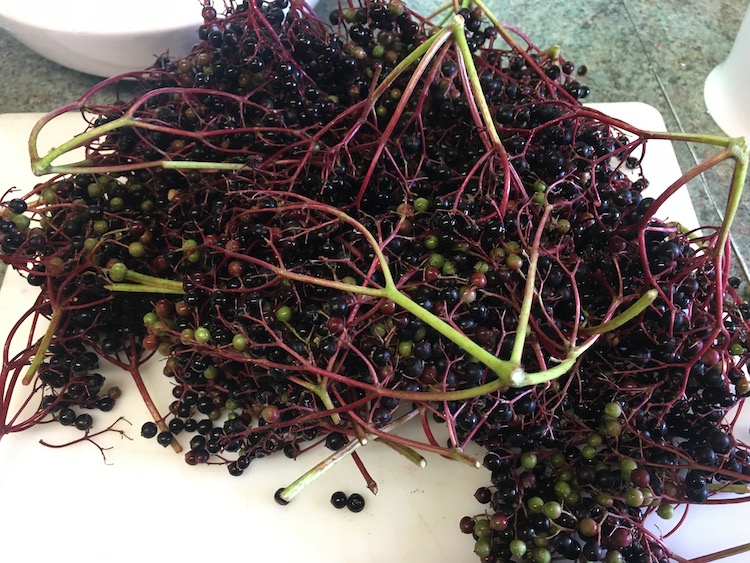 This is about 1 pound (500grams) of fresh elderberries. As you can see, there are some green berries. I went on a 'weed walk' looking for burdock and saw this bush of elderberries, so thought I'd pick some quickly. Another week or two of sunshine would have seen all the berries ripe, but I ran the risk of not being able to get back or someone else having got there first!

It took an extra ten minutes or so to pick off the green berries! 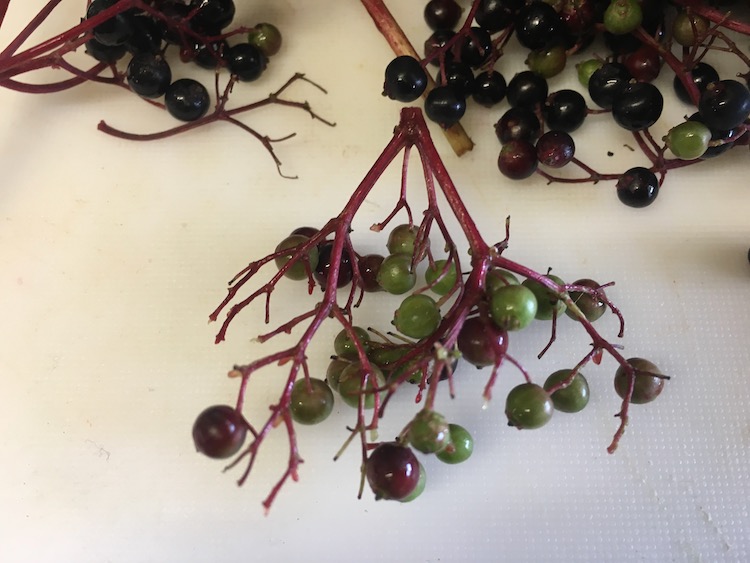 Don't use any berries like this - just the black/dark purple ones. They have compounds in them that our bodies can turn to cyanide (don't ask me how, I don't know). I'm not sure how many underripe berries it's 'safe' to consume and I'm not going to be the guinea pig to find out. 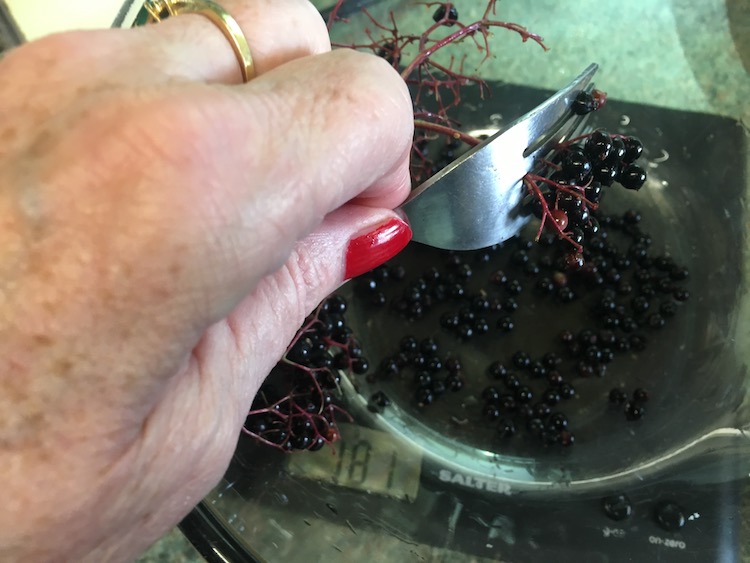 Here's a handy tip - use a fork to help you pull the berries off the stems. They are fiddly and do stain your fingers, although it washes off quite easily. 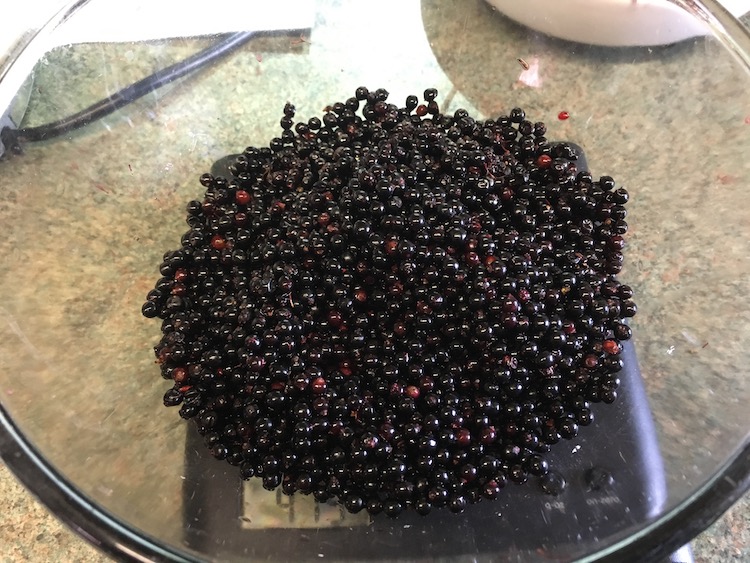 Weigh your berries once they're off the stems. Mine weighed 420 grams and I added 210 millilitres of water. 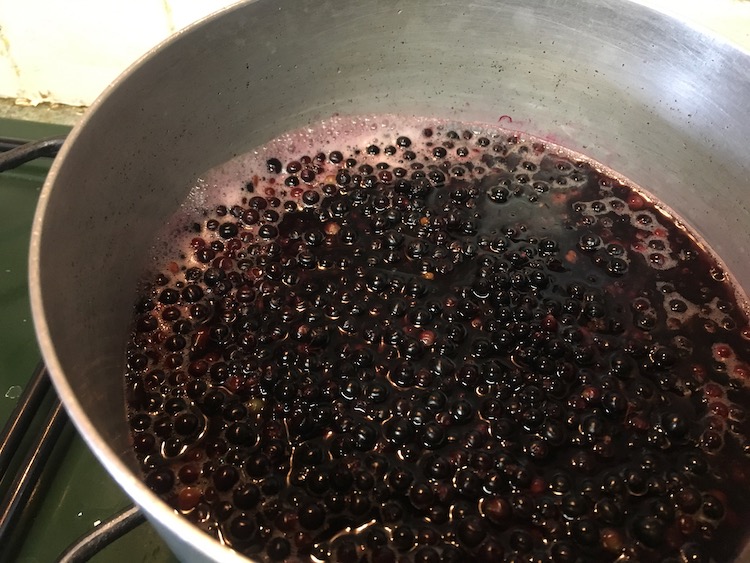 Put them in a pan with half the amount of water to berries. Simmer for 20 minutes. Then allow them to cool. The next stage is straining them and you want them to be cool enough to handle. 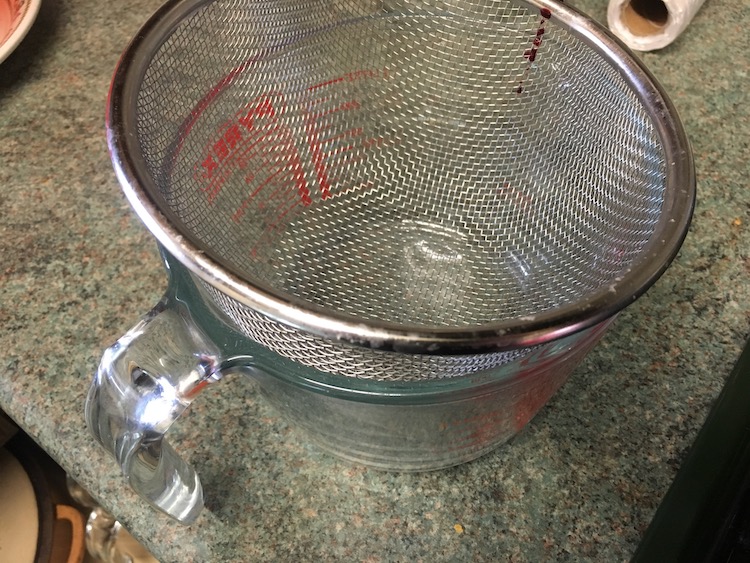 I use a sieve over a measuring jug - you'll need to calculate sugar to juice ratio at the next stage. 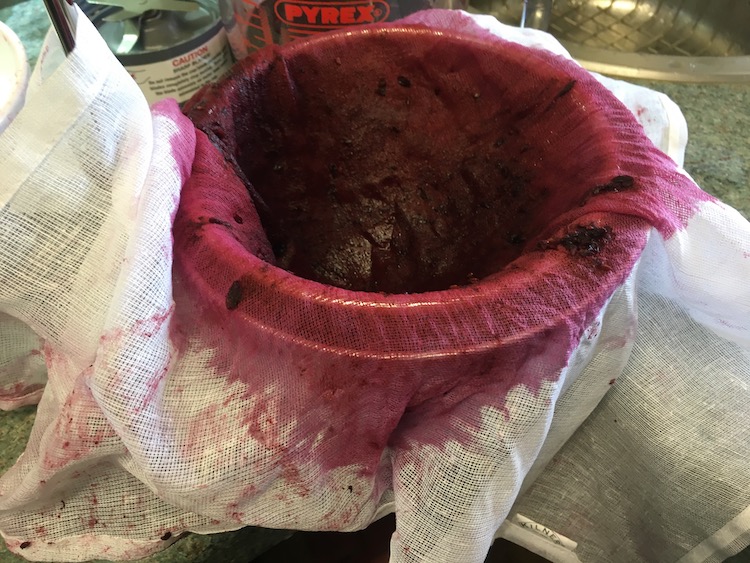 Line the sieve with a muslin cloth (or clean closely woven tea towel) and allow the juice to drip out. 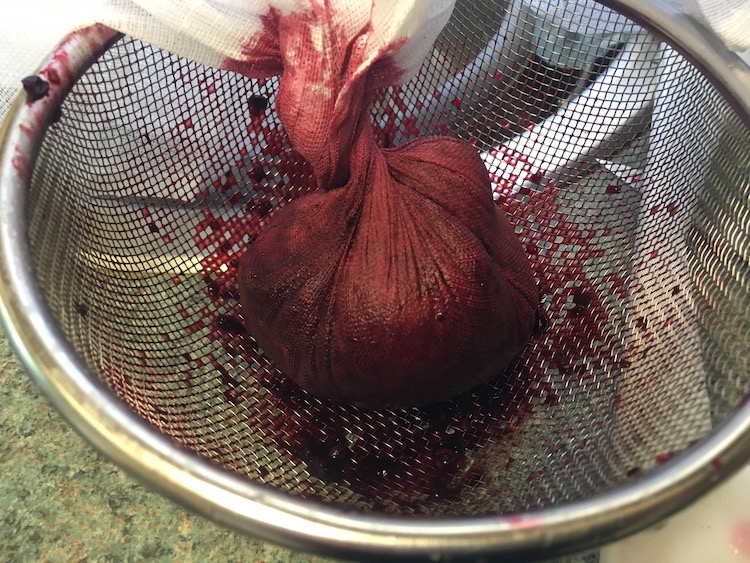 Squeeze the cloth to extract all the juice - it's okay to do this and it won't affect the finished product. We're not jelly making we're making an elderberry juice recipe ;-) 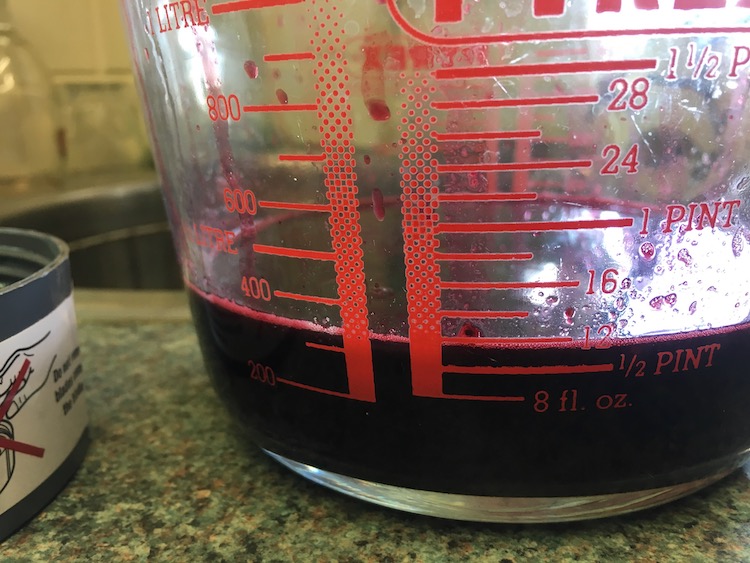 The next stage is to make the elderberry juice recipe itself.

Measure the juice you've managed to extract and add half that amount of dark brown muscavado sugar.  It's not too critical what type of sugar you use and you could use honey (not for under one year old children) maple syrup or something else. 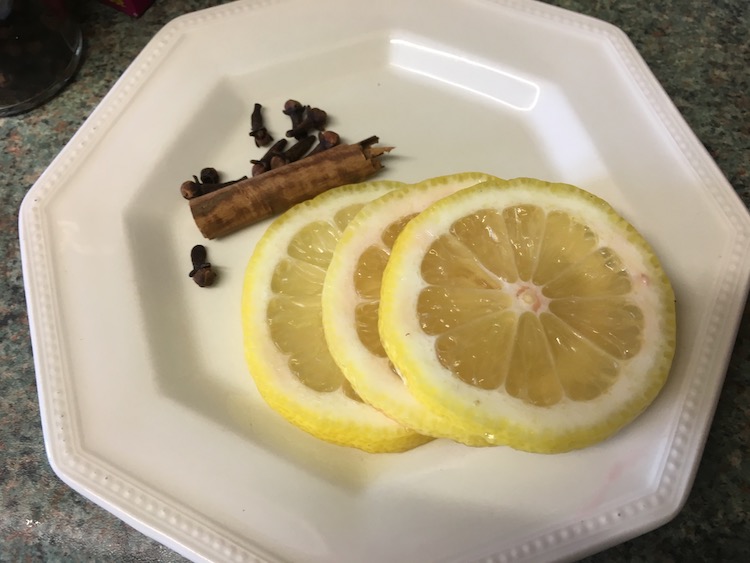 Add three slices of fresh lemon, half a cinnamon stick and eight or nine cloves (this is for my 350ml/12 ounces of juice) 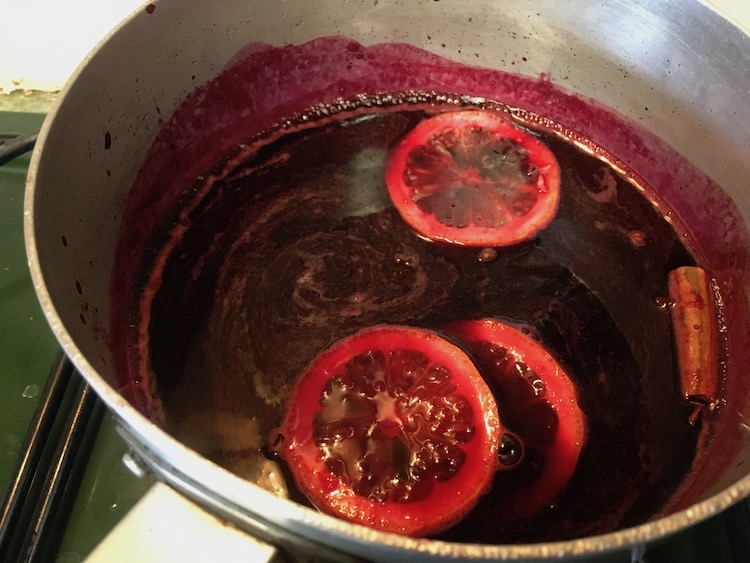 Return the juice to the pan and put on to simmer for around 20 minutes.

Prepare your bottles while you're doing this - they'll need sterilising by your regular method. I put mine into boiling water for 10 minutes, then allow them to dry on the draining board. 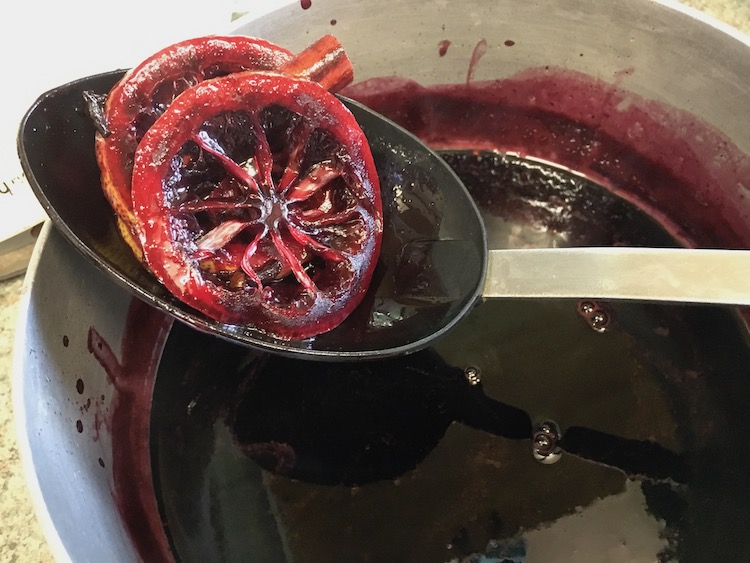 Remove the lemon, cinnamon and cloves from the elderberry syrup. 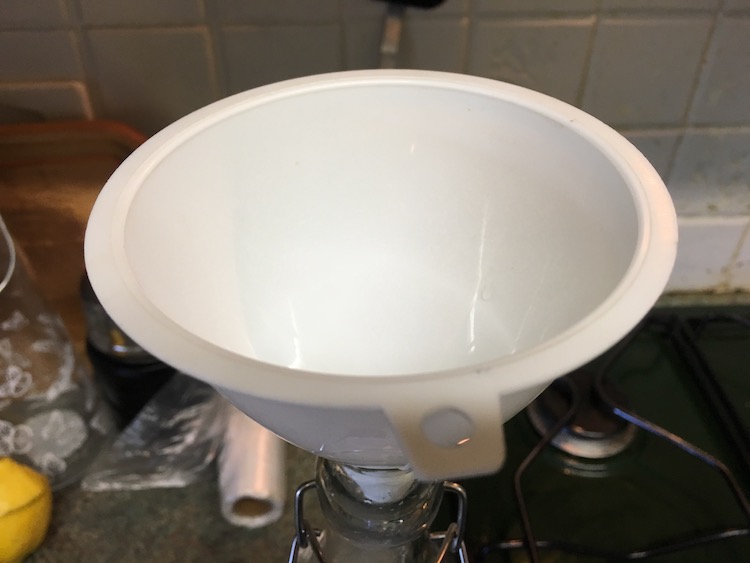 Set up your bottle with a funnel - you don't want to waste any of that precious juice! 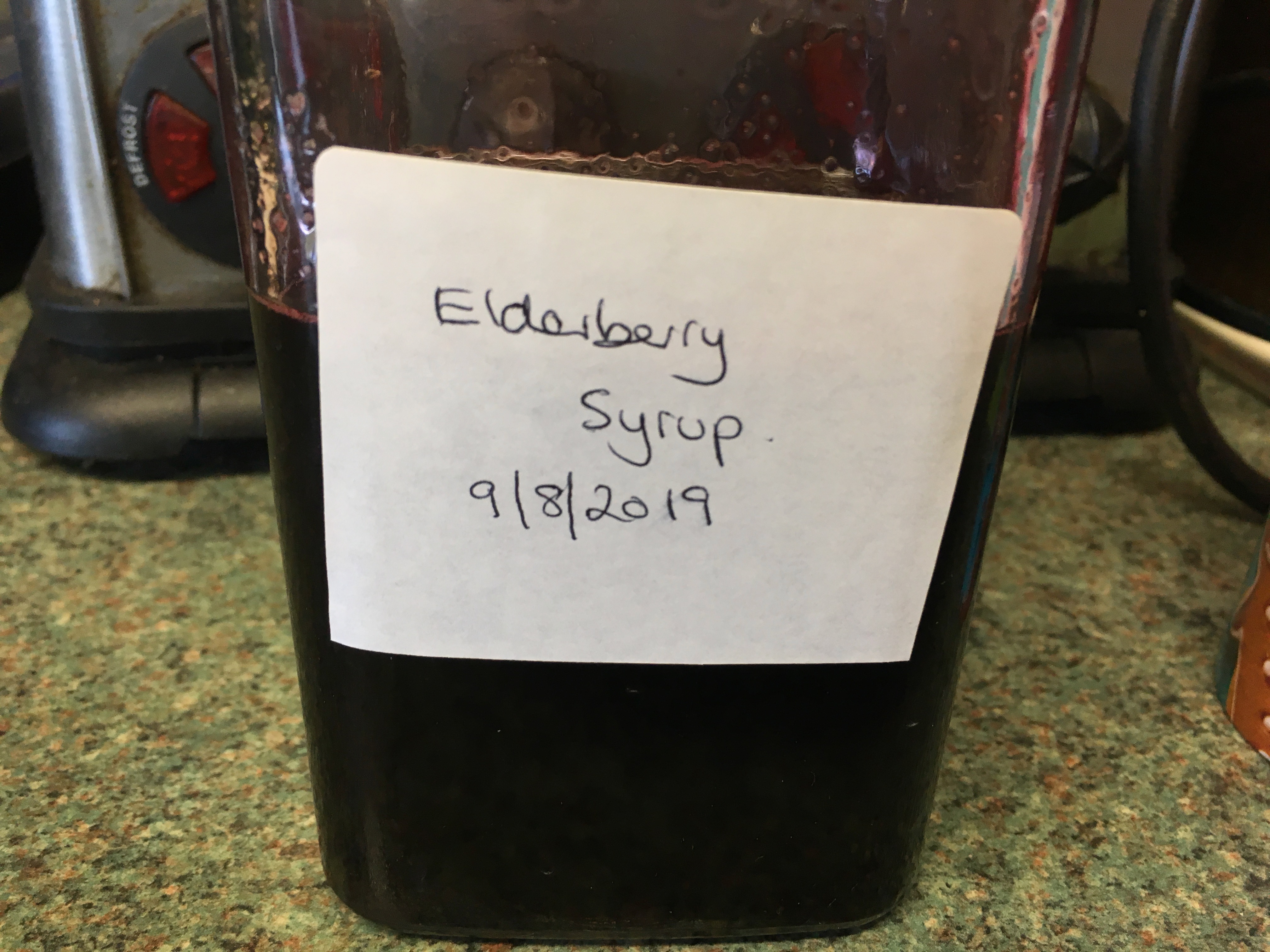 Label your bottle with the date and what's in it. The shelf life should be at least six months, but I keep mine for up to a year, until I'm able to make another batch the following season.

It's air that degrades more than anything, so a simple method that I use is to decant my elderberry juice recipe into smaller bottles. I just pour enough into a bottle for a couple of weeks, then my large bottle only gets opened one or two times a month, instead of every day. I do that with most of my herbal remedies, it preserves  my store for longer.

This elderberry juice recipe probably won't be as thick as the one you buy in the store. It won't cost you nearly as much (my elderberries were free, the sugar and other bits cost no more than two of our funny British pounds!) I got a pint of juice from it.

I've seen elderberry syrup advertised for around £10 for 120 mil - that means the amount of juice I got here would have cost nearly £40 - that's close to $50 US... even if you had to buy dried elderberries that would cost you around $26 for a pound you'd get about $100 worth of juice for that.

There's something that money can't buy though - and that's making your own remedies to help yourself and your family.