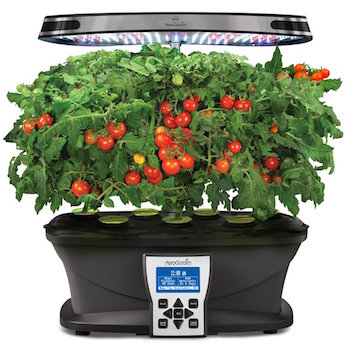 It was easy for me to choose my first aerogarden seed kit, because I knew I wanted to grow herbs in it.

My kitchen is dark and the light just isn't good enough to grow herbs in pots - there's no room near the window and the areas away from the window are so dark - click here to see the problems I faced with growing herbs indoors.

Most Aerogardens seem to come with the Gourmet Herb Kit, but what to choose if you have bought one second hand, or you're doing your second growth in your Aerogarden?

It's great to be able to teach your kids where food comes from - so many don't know the relationship of what's on their plate, never thinking further than the supermarket shelves.

I love the idea of growing some vegetables in my kitchen to pick or cut at, so if you want a seed kit, the ones below are currently your options, but of course, you can still go for the Grow Anything Kit or the Seed Starter Kit.

The Tomato Seed Kit comes with three cherry tomatoes pods. There are blanks to fill in the holes in the base as it's not recommended to leave them open - the roots may crawl out of the holes and debris could fall into the base, blocking the filter. It interferes with the temperature control as well.

Reviews are positive, but some people say that the plants grew too large for the unit. What they did was to take them out of the pods and plant them in dirt. They then put them beside the Aerogarden as the grow light does extend beyond the unit - mine covers an area at least twice as much as the base and I use that space to grow cuttings and seedlings on the countertop.

Some of them got excellent results, getting tomatoes off the plant for up to six months. The trick is to keep picking them - and don't forget that the flowers need pollinating as you won't have insects doing the job for you.

It takes a week or so to germinate, 45 days to blossom, 75 days to fruit and 105 days to harvest. Then you're away picking tomatoes for months. 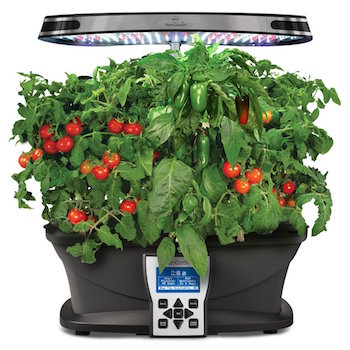 The Salsa Kit has two cherry tomatoes and one jalapeño pod.

Reviews are good overall - most people super excited at having these growing on their countertop!

The Jalapeños - most people rate them very highly. There is some negativity but that's largely down to the plants growing too big for the unit.

Again, it's a good idea to get the plants off to a good start in the Aerogarden and then transplant them into dirt - grow on outside if you have good weather and it's the right time of year, or put them beside the Aerogarden so they can take advantage of the grow light.

The harvest timings are around the same as the tomatoes. 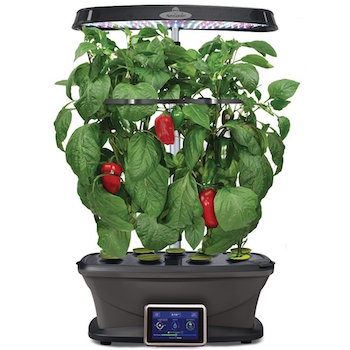 Don't these look gorgeous? The Sweet Bell Pepper Kit is meant to be grown in the TALL model - that's about 24 inches between the base and the grow light.

Most negative reviews are because people were expecting seeds to be in the blank pods - it quite clearly states what's in the box, so that's just people wanting a moan.

Virtually everybody is thrilled with the product - I would give them a try even though I only have the standard model and just keep the peppers pruned down to a lower height. That would mean they'll bush out a bit more.

If you leave the green peppers on the plant a bit longer, then they will turn red. They're small and will keep going for ten months or so.

You've still got the option to get your plants off to a good start in the Aerogarden and then transplant into dirt. 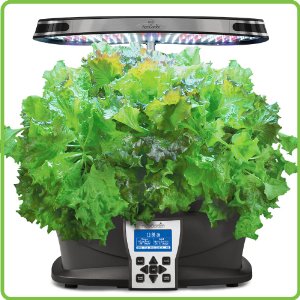 This Salad Leaf Seed Kit comes with between 6 and 9 ready seeded pods of salad greens - you order depending on the size of your Aerogarden.

They do say that there are three varieties included - red/green leaf, romaine and butterhead

The positive reviews are glowing - within a couple of weeks, people are picking their own fresh salad leaves - they can pick enough for two adults and one or two kids on alternate days and they keep picking for two months or longer before needing to replace. That's exceptionally good to be able to do that

Some of the negative reviews are saying that they only got one type of lettuce or maybe only one of one kind when they would have liked two.

Now, all the reviews of every kit say that if there is a problem with the seed, they have contacted Aerogrow and the pods have been replaced. As gardeners, we are realistic and know that sometimes, for whatever reason, seed that you thought was perfectly good, doesn't germinate. Without exception, the pods complained about have been replaced.

However, I would say, that when my herb kit came, the Genovese Basil failed to germinate - I got two seeds out of a packet I had in my fridge, pushed them into the grow pod and three days later, they'd popped up. I didn't want to wait and I had the solution at hand.

It comes with an instruction leaflet, the pre-seeded pods, grow domes and the nutrient. 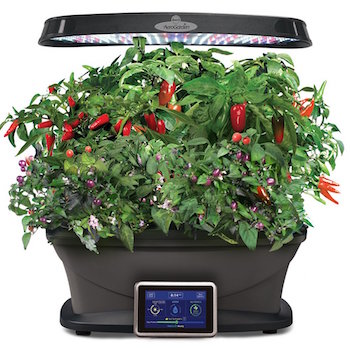 The Chilli Pepper Seed Kit contains three types of chilli - there are 2 Jalapeños, 2 Red Fire Chillies and 2 Purple Super Hot Chillies. The 9 pod kit has three of each.

The reviews are mainly raving - people take them to work to grow on their desk and their colleagues help themselves. The flowers are purple in the Purple chillies and they look pretty. People are really excited about being able to grow their own chilies in the kitchen.

They fruit for months but some of the negative reviews say they were disappointed that the seeds didn't sprout - do contact Aerogrow if they don't come through and they will replace your pods - some said they got no fruit.

I am suspecting that those people didn't bother to read the leaflet properly and didn't hand pollinate the plants. You won't have insects to do the job for you, so you must hand pollinate. Shaking the plants might work, but it's just as easy to get a small soft brush and go over all the flowers two or three times to spread the pollen.

It comes with an instruction leaflet, the pre-seeded pods, grow domes and the nutrient. 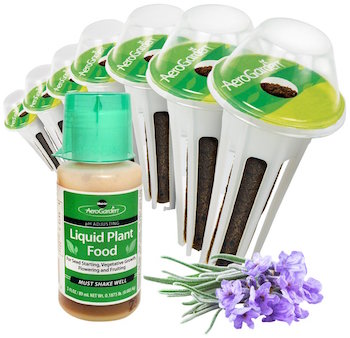 Wow! An Aerogarden full of lavender - can you imagine how divine that would smell?

An abundance of fresh young leaves to dry would be lovely, but in practice, the reviews say different.

Most people are disappointed with the kit and report failed pods as well as slow growth. The general consensus, and I must say, I agree would be to start the seed off and grow on in pots indoors or out.

So perhaps, this is one to save your money on. 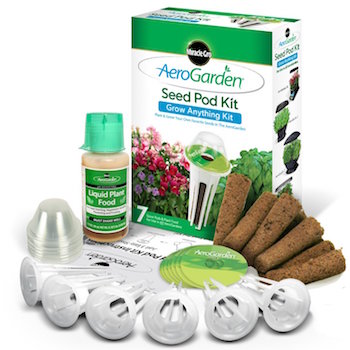 This Grow Anything Kit is a good idea if you want a different mixture of herbs, salad, vegetables or flowers.

It has the sphagnum moss grow sponges, the pods, cardboard covers, domes, nutrient and an instruction leaflet - everything you need except the seeds which you will have to buy yourself.

Keep your seeds in a polythene bag or box in your refrigerator - they will last for years so long as they're dry and cool, well beyond their recommended use by date.

One advantage with the Aerogarden is that you can use 'old' seeds and if they don't germinate quickly, then you're able to just buy another packet and get them off to a quick start.

The seeds in my Gourmet Herb kit all made an appearance within the first week although some were quicker into growth than others. 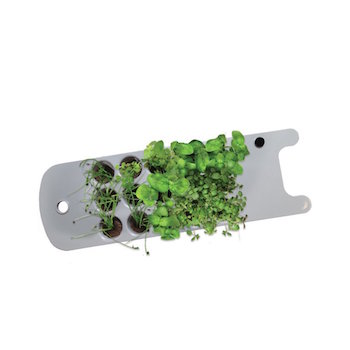 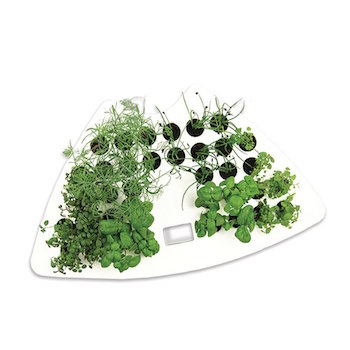 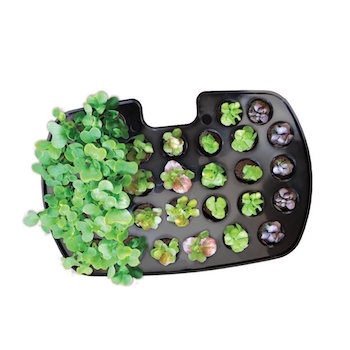 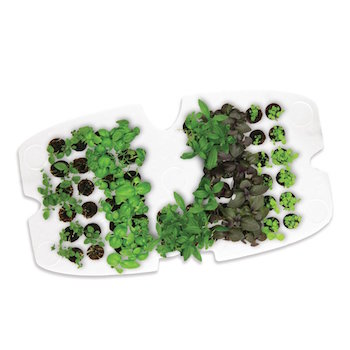 These are available for 3 pod, 6 pod, 7 pod and Harvest Aerogardens.

The cells range from 15 to 50, depending on the model of Aerogarden you have.

They come with the grow sponges and nutrient, plus an instruction leaflet.

You supply your own seeds and the idea is to start them off quickly under the growlight then transplant after the usual hardening off to their final position.

Setting up the Aerogarden - step by step photos 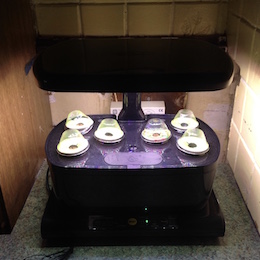 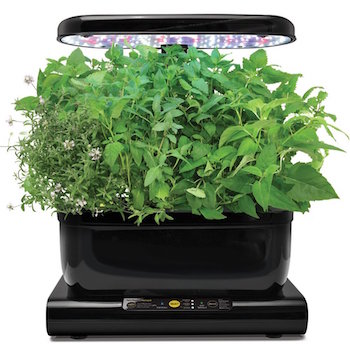