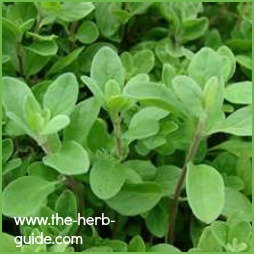 The confusion between sweet marjoram, pot marjoram and oregano (wild marjoram) is often made more of than really necessary.

Sweet is normally treated as a half hardy annual - pot is a perennial and wild is merely another name for oregano, also a perennial plant.  That's it in a nutshell. They are fairly well interchangeable so far as culinary uses go.

They are all members of the mint family. The latin binomials show how closely related they are:

Oregano or Sweet Marjoram are the ones normally used in cooking, especially Easter Mediterranean dishes. It's useful to know though that Pot Marjoram was originally developed from Wild Marjoram and as it's a perennial, it's well worth having in your herb garden as it will reappear year after year.

In my part of the UK,  Kent, there is a lot of wild marjoram growing in the fields and hedgerows, it's very common.

Here, we're going to concentrate on the half hardy sweet type.

It is used particularly a lot in mediterranean cookery - pasta sauces, pizzas, tomato dishes, vegetables and to flavor bread, oil and vinegar.

It is highly aromatic and so makes a good addition to a pot pourri.

Growing
It is normally treated as a half hardy annual although in milder and sheltered areas it is actually a perennial.

Sow the seed indoors in early to mid spring - harden off during late spring and plant out in early summer.

The plants will grow to about 8 inches high during the season.

They like sun, warmth, well drained and fertile soil. Quite demanding really for some climates, but well worth the effort if you eat a lot of tomato based dishes.

Harvest just before the flowers start to come through the 'knots' - you'll know what I mean when you look at the plants.

It's the mildest version of the marjorams.

Rescue Remedy
If you've been lucky enough to inherit some, then it will probably be self seeded.

You just need to keep it weed free - if it's self seeded, then it's obviously growing in the right spot!

Treat it with tender loving care and it will reward you with an aroma and taste which will evoke holiday memories. 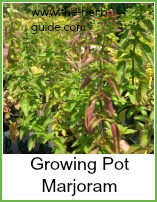 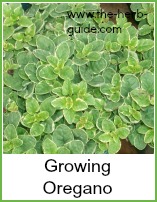 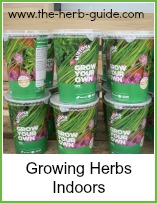